“Some people come into our lives and leave footprints on our hearts and we are never ever the same,” artist Flavia Weedn once said.

Jeff Dornink was one such person.

As a show of incredible support for the late Southwest Tech agriculture instructor, the Jeff Dornink Memorial Fund has reached a major milestone, with more than 300 donors contributing to the former agriculture faculty member’s fund and insuring it is endowed for eternity. 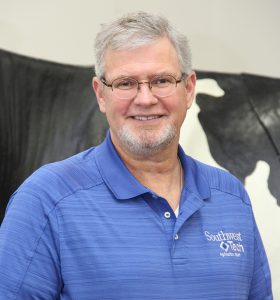 “The Southwest Tech family was deeply impacted by the loss of Jeff Dornink,” said Executive Director of the Southwest Tech Foundation Holly Clendenen. “Donations have come from a variety of sources and many individuals, especially young alumni of Southwest Tech, have given their first gift to establish this fund at the endowed level.”

In total, there have been 105 new alumni donors and 151 new friend donors to this fund. The current number of gifts stands at 350 and counting from 327 different donors. “As far as I can tell, these are record numbers for any fund at the Southwest Tech Foundation,” said Gina Udelhofen, coordinator of annual giving, donor relations and scholarships. “What makes this special is the outpouring of support from people he taught and who adored Jeff, but also the friends and colleagues he developed strong relationships with along the way. He was more than an instructor … Jeff was a friend and mentor to many.”

The recipient of the Jeff Dornink Memorial Scholarship for 2018-19 is Levi Kindschi from Loganville.

Jeff left an incredible legacy throughout the region and especially the agricultural community he served and grew professionally in since 1986. In 1999, Jeff was named the Dairy Herd Management instructor at Southwest Tech and played such an important role in the development of his students and his many deep, meaningful relationships with coworkers, alumni and friends.

Dornink was an active community member and he served on many councils and boards over the years in the agriculture industry, his community and in the church.

Jeff passed away on July 26, 2018, a day that will live on as a day of great loss for the Southwest Tech family. He left behind his loving wife, Lynette, and son, Tyler.

Many of those who supported this scholarship left cards and notes which detailed their strong memories of their time with Jeff and depicted him as a devoted family man, an instructor who went above and beyond for his students and as a human being who valued time spent with loved ones.

“I remember my last conversation with Jeff well,” said Brock Pelton, owner/manager of Calais LLC and a Southwest Tech graduate in 2018. “I’d told him a few months before that I would be taking over Calais, the business that I’d been working at since I was 11. It was out that Jeff was retiring at the end of the summer, and we were floating the idea of him becoming a salesperson for the business. Our parting words were to chat in a couple of weeks and get going from there. I put his number in my phone at that moment.

“Obviously, that call was never made. But, I never removed his contact, and I don’t think I ever will.

“I hope this money goes to help spread Jeff’s legacy in ways that he even never imagined. The old adage goes, ‘Wise men plant trees in whose shade they know they will never sit in.’ I think Jeff believed in that statement, albeit he would’ve wished that to be a few more years off.”

Pelton made his first gift that day, which accompanied his note. He then added, “I hope to become as successful as Jeff dreamed that I could be. I owe him so much in thanks that I’ll have to wait to give him.

“Rest easy, to the best employee I never had,” Pelton concluded.

Brock Pelton’s words perfectly summed up the feelings of so many who wanted to give something back to help secure Jeff Dornink’s legacy at Southwest Tech for eternity. With the memories of time shared with his favorite instructor, Pelton knows like we all do that we are far better off to have known Jeff Dornink – and lost him – than to have never known him at all.

A 2013 Dairy Herd Management graduate pledged his first gift of $20.13 through the phonathon to support the Jeff Dornink Memorial Scholarship. When he sent in his donation with his pledge reminder, he crossed off the gift amount of $20.13 and instead gave $1,000, along with a note that read, “Jeff was my advocate and friend – his support made it possible for me to complete my degree in Dairy Herd Management in 2013. I am happy and pleased to support a scholarship that honors him. Thank you.”

Because of Jeff Dornink’s impact on the agriculture programs and college community, the Southwest Tech Agriculture Department wanted to remember Jeff with a Giving Tree on campus as a physical space to be a reminder of Jeff’s time on campus for students, faculty, staff and visitors to campus. The department invited current and retired staff members to join them in the effort and Jeff’s Giving Tree is located outside Building 100, and has a plaque that reads: “’You may not see the fruit of today’s work, but you have seeded a lifetime of knowledge.’ – Anonymous. In Memoriam to Jeff Dornink, Dairy Herd and Animal Science Instructor, 1999-2018”.