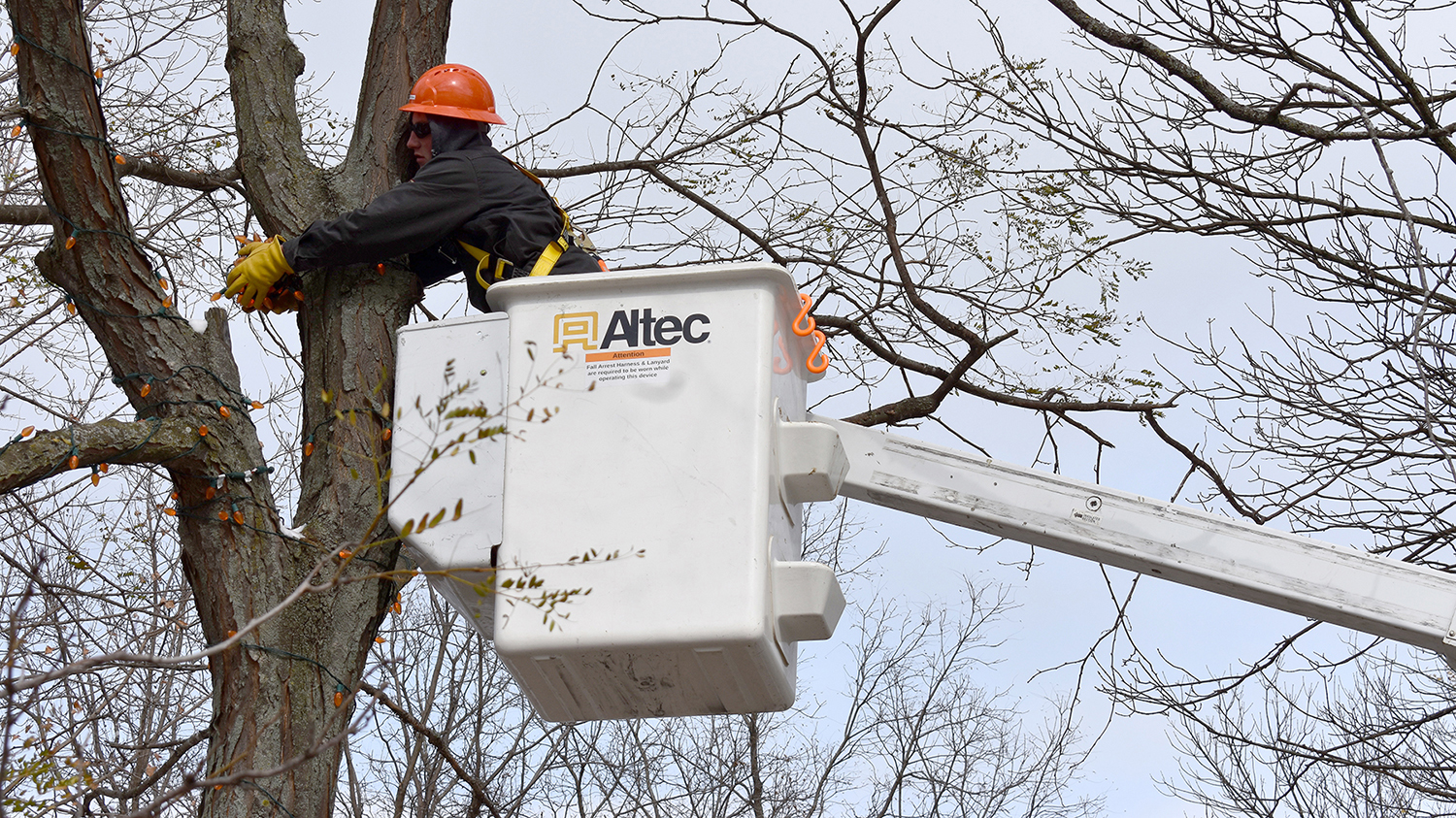 Billed as “The region’s most spectacular light display,” the Rotary Lights in the Park event in Richland Center, Wisconsin is made possible thanks to the efforts of students in the Electrical Power Distribution (EPD) program at Southwest Wisconsin Technical College in Fennimore, Wisconsin. 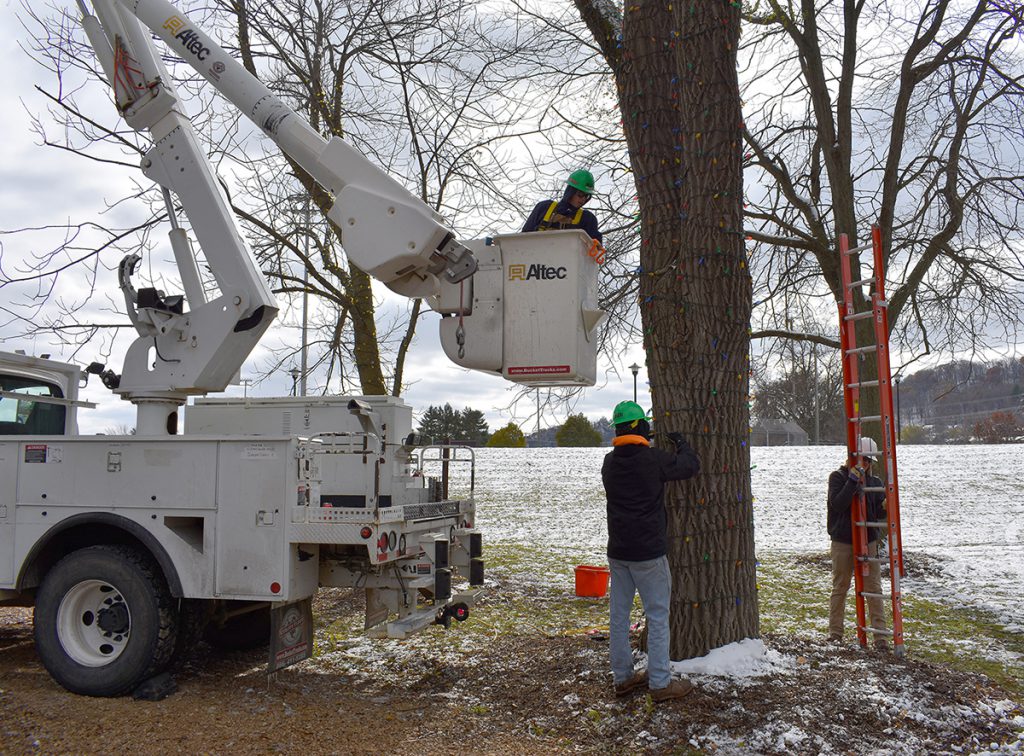 The display begins at Krouskop Park on Thanksgiving Eve and runs through New Year’s Eve and is sponsored by the Rotary Foundation of Richland County.

The students were at the park for two full days, Oct. 31 and Nov. 1, adding their hard work to that of the Richland Center crew. “We’d never be able to do it without the help of the Southwest Tech students,” said Dale Bender, electric utility superintendent with the Richland Center Electric Utility. “That’s been a great partnership.”

“You imagine you get that many people in eight buckets, in lifts, up in the air you can accomplish a lot,” said Keith Behling, co-chair of the Rotary Lights in the Park. “We’d still be doing it if we were doing it ourselves. They are vital to the program, actually.” 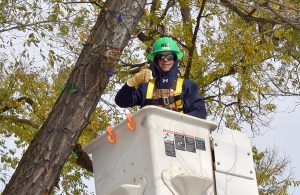 The display started in 2012 on a much smaller scale, according to Bender. “We had a few trees and displays then,” he said. This year they wrapped limbs on 26 trees and are expecting to host at least 10,000 visitors.

“The biggest thing is seeing the joy it brings to families,” said Behling. “It’s been setting a family tradition that people keep coming back here year after year.”

“Everything about this is community oriented and so what we do, everything is volunteered,” said Bender. “The utility, we donate equipment, our hours, everything like that, to make the project go.”

There is no charge to visit the display, however donations of money and food are accepted. All donations are given to the Richland Community Food Pantry in Richland Center. Last year, more than $7,000 and 10,000 items were donated to the pantry. “People are very giving,” said Bender.

The history of Southwest Tech’s involvement with the Rotary Lights in the Park dates back to September 2015. Randall had just started his tenure as an instructor at Southwest Tech. Bender reached out to him to see if students would be interested in stringing lights on trees. “He wanted people who were familiar with working in bucket trucks, working from lifts and also weren’t afraid of heights and were hard workers,” said Randall. “I thought it was a great idea. It’s a great opportunity to help the community and at the same time, network with other linemen in the industry.” 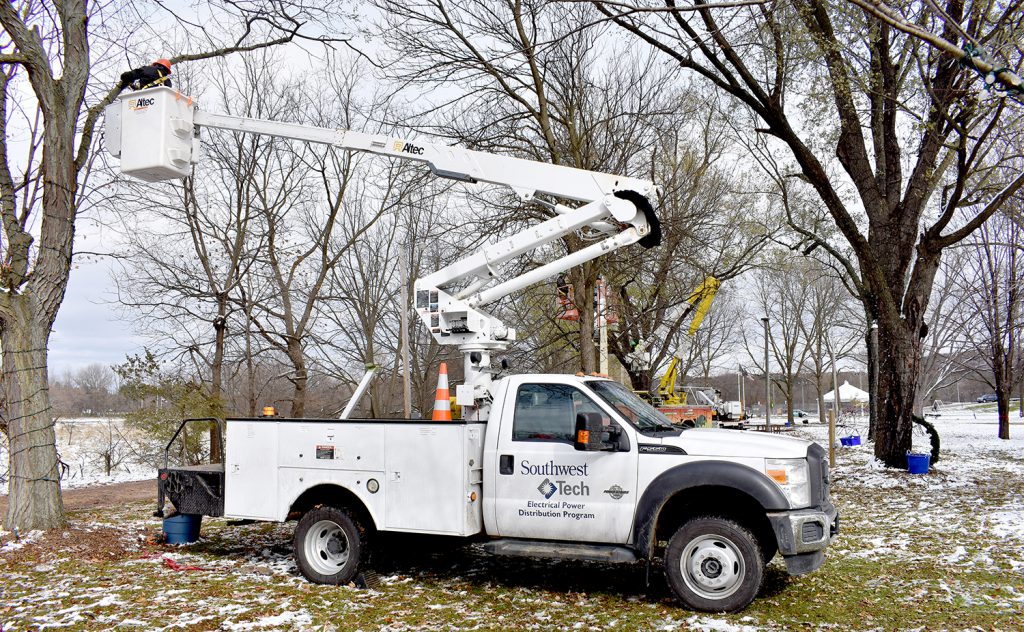 The event and the students’ responsibilities has grown since 2015. The students also return in the spring to help remove the lights.

Behling has been involved with the event since the beginning, being a founding member. He noted they keep the event fresh annually and this year they have 15 new displays.

There are designated times nightly for pedestrians and vehicles. Walkers can view the lights at 6 p.m., with only vehicles allowed in the display at 7 p.m.

If there is poor weather, the display may be closed. Closures are announced on WRCO radio. The decision is made by 3 p.m. that day.