Some things make for a great combination, like Batman and Robin or peanut butter and jelly. What about welding and music? For James Swim, a welding student at Southwest Wisconsin Technical College, from Stitzer, Wisconsin, he combined his passion for music and his talent for welding and created a steel cello. “I heard about making a steel cello from a friend and I thought it would be pretty cool to make one,” he said. “I love music and I play for our little church in Fennimore (Trinity Evangelical Free Church). In fact, I play music almost whenever I get the chance; cello, guitar, but mainly piano.”

Swim was introduced to welding at an event on campus and decided that “it sounded interesting and there were good job opportunities.” He is a student in Ed Anderson’s welding program and and he plans to graduate Dec. 10. “James is fantastic,” said Anderson. “He starts early and stays late. He is talented in all welding processes and with his music. He put 60-plus hours grinding, polishing, and assembling the cello. So, his grade on his 10-hour project was definitely a 100 percent.” 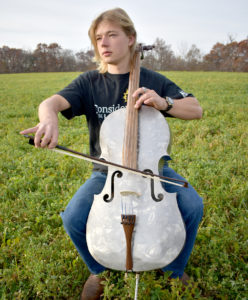 The cello project for Swim began during the summer and he completed it in October.

Swim’s love for music began at an early age. His dad and sister taught him how to play piano. His other sister played violin and her teacher got him started on the cello. He later found a cello teacher to further his knowledge. In addition, he picked up the guitar, “with help from a few folks.”

Swim will be showcasing his talents on Friday, Dec. 10 when he will be playing his cello at each of the Southwest Tech commencement ceremonies. They are scheduled for 1 p.m. and 3 p.m. in the auditorium. The ceremonies will also be streamed live on the college’s Facebook page.

| Southwest Wisconsin Technical College is one of 16 institutions that comprise the Wisconsin Technical College System. Southwest Tech offers more than 60 programs in a wide variety of disciplines. Courses are offered on campus, online and in a blended format. The college provides apprenticeship, certificate, technical diploma, and associate degree programs that respond to district workforce needs and prepare student for family-sustaining jobs and career advancement. |