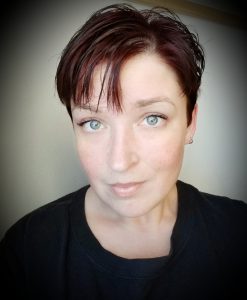 Winters lives just south of Duluth, Minnesota and found Southwest Tech in 2016 when she was interested in becoming a midwife.  “I never would have known about Southwest Tech had it not been for the midwifery program, but working full-time and trying to fit in the clinicals just didn’t work with my schedule,” she explained. “I had to sleep at some point.”

Winters had been with her employer since 2008, working with billing and claims. She initially took the Medical Coding Specialist certificate to gain a better understanding of the coding system. “I don’t like to wait for anything,” Winters said smiling. “I wanted to be able to answer questions without having to go to someone else on staff who could explain the claims to me, which could take several days before I had answers to respond to the provider and patient.” Once Winters finished the certification, her instructor and program lead, Jen Lame encouraged her to continue and finish the HIT degree.

When asked what her experience was like Winters was honest. “It was extremely hard,” said.  “I’m used to being excellent at what I do right away. Coding isn’t black and white so that was difficult.”

Winters met two women in the program and they decided to create their own study group. They did homework on their own and then met up once a week to check-in with each other, compare notes and help each other. “We were all moms, we were all non-traditional, and we were all in it together,” she said. Kasey also credits her instructors, Jen Lame and Jeanne Smoczyk, for all their assistance as well as the tutors in the Knox Learning Center and for all their help and guidance.

“My advice to anyone entering the program is to use all of the resources available and not to be afraid to ask questions,” said Winters.

Even though Winters was not able to walk across the stage at graduation she said she still participated in the ceremony from her living room. She graduated with honors and was offered a more fitting position for my new skills with an increase in salary.