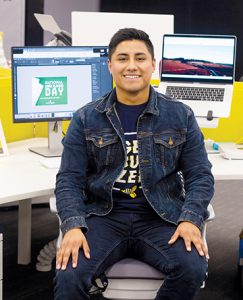 Those who know Mendez well, and he was widely known on the Southwest Tech campus due to his involvement in a number or organizations, will tell you he is a very special person. One of his gifts is his kindness which is key to his positive outlook on life. Combine that with the discipline and work ethic he learned from his family and Mendez has the tools needed for a successful career and life.

Mendez was involved as a student ambassador, as well as a member of Philo Theta Kappa Honor Society. He was art director for the Graphic Innovation Group (GIG), was vice president of Student Senate, a marketing department employee on campus and served as manager of 3 Marias Ice Cream.

“Southwest Tech has given me the foundation for my future success,” Mendez said during his graduation speech to fellow graduates in spring 2018. “Through my program courses and various leadership positions it is really the people on this campus that have made such a difference in my life.”

The son of hardworking immigrants who settled in the Darlington area after immigrating to the U.S. from Mexico, Mendez is a first-generation college graduate. He served the Army National Guard with honor, having received the Army Achievement Medal. “I think my time in the Army made me realize I couldn’t give up on my dreams, that I had to continue to work hard and that I had to go to college to pursue my passion … graphic design,” he said.