As an electrician, Chris Tipton didn’t have much of a problem finding work, even though he hadn’t achieved journeyman status in the trade. But there’s a difference between just holding a job and building a future, particularly when the family depending on you includes four children.

“I had been kind of stagnating and didn’t see much room to grow,” said Tipton, 35, of Platteville. “I definitely needed to have things move forward.” 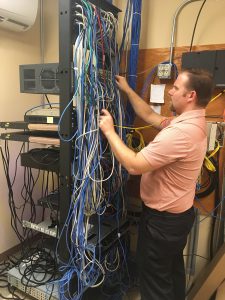 Meanwhile, at Southwest Wisconsin Technical College, academic leaders were listening to employers to determine what kinds of workers were desperately needed in the region and how applying for a share of a federal Department of Labor grant might help. What they came up with resulted in a $1.25 million IMPACT Grant award over four years to concentrate on training people to work in broadband and fiber optics technical areas.

And that resulted in Tipton obtaining his current position as a networking communications specialist for the Reedsburg School District.

“I’m the computer technician for seven different schools,” Tipton said. “Things are 100 percent better than they were before. I’m earning almost double my old salary.”

The details of the story reveal how government and education, partnering with the business community, can make things happen that benefit individuals in need of a boost, and the job creators in business.

“Prior to the grant money becoming available, we heard input for the IT advisory committee to look into a broadband certification,” Holverson said. “In the Electro-Mechanical Technology program, their committee wanted to see some fiber optic background from students. So we combined the two, and came up with coursework that would work for both programs.”

Both the IT-Network Specialist and Electro-Mechanical Technology programs at Southwest Tech are two-year associate degree programs. But now embedded within those programs are an introductory CISCO certification, referencing the giant computer hardware and telecommunications equipment company, and a Fiber Optic Association (FOA) certification. Students in each program earn both, and can use them to seek employment even if they don’t finish their associate degrees. Holverson said currently employed students have also enrolled in courses to improve their skills and employment opportunities.

Holverson added that companies with facilities in or near the Southwest Tech district like 3M, Cardinal Glass and Schreiber Foods and Reedsburg Utilities were asking for people with this type of training.

“Our company continues to excel directly due to the talent we’ve drawn from Southwest students,” said Jason Tyson, a partner at TC Networks, Inc., in Dubuque. “The skills these team members bring are extremely well versed in all aspects of physical and logical network systems. As an example, the Fiber Optics certification they received in the spring went directly to use on Fiber Optic deployments that following summer with great customer feedback. We look forward to the innovative teachings these students receive in producing highly effective team members. “

“We used the grant money to provide instructional training for instructors to teach the certification courses, and to get the materials we needed.” Holverson said. “Grant funds are also used to pay tuition for underemployed or unemployed people, with a target group of 17-to-29-year-olds.”

The program has made a big difference for Tipton.

“Me and computers didn’t get along before I went in the Networking Specialist program,” Tipton said. “But I knew I was going to be capable of it. I had done my research and liked the program, in terms of how many graduates had jobs and how much they were making.”

Tipton says his time in school was tough on him and the family, but it was totally worth it. He received his certifications during his second year in the program, but didn’t stop there. He gained an internship at Southwest Tech, and after earning his associate degree, shopped his new skills in the market.

“I’m glad I did it,” Tipton said. “I was hoping the IT program would be a good fit for me.”