Scott Knutson, a Platteville native, credits Southwest Tech for the strong foundation that he has built his career on. After graduating from Platteville High School, Knutson took a year off and then decided to attend Southwest Wisconsin Technical College to pursue an Associate’s degree in Finance. “My degree opened up a lot of doors for me and the investment in my education has paid off immensely,” said Knutson, accounts receivable and credit manager for The Pokémon Company International. 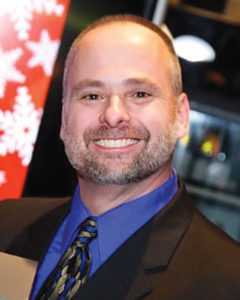 Knutson praised his program instructor, Joan Senn for teaching him all the technical skills he needed to be successful in the finance industry. “I had learned about business law and consumer law in my classes, which really impressed my first hiring manager,” said Knutson. “I was able to use my degree and build on it with other national certifications as my career progressed.”

Knutson started his career in consumer finance and then moved into business finance, when he started working for Carnes Company in Verona, Wisconsin. He then moved to Chicago, Illinois to work for Pliant Corporation as a credit analyst. The company was bought by Berry Plastics and instead of moving to their headquarters in Indiana, Knutson became the AR financial analyst for ACCO Brands, before being promoted to credit manager.

After a couple of very brutal winters, Knutson and his husband decided they wanted to move somewhere that was a bit milder and really loved the Seattle, Washington area. Knutson said he started a job search and in 2014 he started his role with Pokémon. “I work with a phenomenal group of people and it’s just an amazing company,” he said. In his role, Knutson is responsible for managing the accounts receivable for their wholesalers and retailers. He and his team manage financial risk and ensure they are following all state, national and international laws.

Despite the pandemic, Knutson said the company has done really well this year. The thought is that people may be looking for a nostalgic gaming experience and they can play Pokémon socially but safely.

Scott praised Southwest Tech for being a wise investment that has proven a great return.