Holly Clendenen, executive director of the Southwest Tech Foundation and Real Estate Foundation, recognized Philanthropy Award recipients Sam Fugate and Bobby Lee of Cummins Emission Solutions and Donald and Susan Tuescher. Cummins Emission Solutions of Mineral Point has been supporting the Southwest Tech Foundation since 2005 and has awarded scholarships to Southwest Tech students since 2011. Cummins’ largest investment in Southwest Tech came in 2017 with a $90,000 commitment to the college’s Mobile Welding Lab. This gift helped the college purchase and equip a mobile welding lab in order to expand welding offerings to high schools students, local employers and local incarcerated populations. Since May 2017, more than 100 individuals have received training in the mobile welding lab, with more training scheduled throughout 2019. In the summer of 2018, Cummins awarded the Southwest Tech Foundation an additional grant for scholarships for welding students, increasing the company’s scholarship awards for 2019-20 to $5,500.

Donald and Susan Tuescher have been supporters of Southwest Tech for many years. Don was appointed to the Southwest Tech District Board in 1994 and is the second longest-serving member on the board. Tuescher Electric and Refrigeration has been a long-time employer of Southwest Tech graduates, and Don represents the company on the advisory committee for the Electromechanical Technology and Instrumentation and Controls programs. In 2016, The Tueschers established the Brian J. Tuescher Scholarship in memory of their son. This endowed scholarship provides an annual scholarship to a student enrolled in the electromechanical technology or instrumentation and controls program. Don also serves as a member of the board at Southwest Health in Platteville, Darlington Mutual Insurance and the Southwest Wisconsin Electrical Contractors Association.

“The award program was established to recognize alumni who demonstrate the value of their Southwest Tech degree or certificate through advancement, participate in community service activities, seek and fulfill continued personal and educational growth and support Southwest Tech,” stated Schmelz.

Deborah Johnson served 30 years in the nursing field and started a volunteer role at Good Neighbor Clinic, a free clinic in Sauk Prairie. In 2014 she was instrumental in the development of the Sauk Prairie Community Activated Recovery Enhancement (CARE) program and was hired by Good Neighbor Clinic as the clinic coordinator/recovery coach of the CARE program. CARE is an integrated system that puts each individual at the center of their treatment, which empowers the individual to make better life choices, Johnson said. Johnson and her colleague, Joan Mack helped more than 400 people get into a recovery program and have been able to obtain $3 million in grants because of the success of the program. In addition, Johnson also runs the Sauk City Al-Anon Program.  Johnson said she continuously tells her clients what she was told as a student at Southwest Tech. “I was told I could achieve my dreams, that I was worth it and that I was not alone.”

Scott Pauls serves as the director of service delivery for the Wisconsin Independent Network (WIN), based in Eau Claire. Pauls became the Director of IT for Boscobel Hospitals at the very young age of 23 and now, at the age of 30, has achieved the status of Systems Engineer. Aaron Halverson, Scott’s instructor at Southwest Tech stated, “This is impressive given the fact that someone with a systems engineer position typically has a bachelor’s degree or over 10 years of industry experience.” Pauls serves on the Network Communications Advisory Board, frequently visits with IT students on the Southwest Tech campus, spoke at the first IT Summit that was hosted on campus last spring and also gave opening remarks at the Data Center Ribbon cutting last fall.

Ritch Stevenson is the president and owner of Building Automation Products, Inc. (BAPI), a premier sensor manufacturer for HVA, specializing in sensors for temperature, humidity, pressure, wireless and air quality monitoring. After working in the Madison area following graduation, he started BAPI in1993 in a two-stall garage and a couple of office spaces. After moving to his hometown of Gays Mills, Ritch built a 50,000-sq. ft. manufacturing/office facility. Building Automation Products, Inc., has doubled in size over the past few years, and is now an international business after opening an office in the United Kingdom in 2017. “BAPI hosted the Southwest Tech District Board in November 2017 and the board members were impressed with the international manufacturing business Ritch and his wife have built,” stated Schmelz during the program. Stevenson is involved with local and regional economic development, helped with the Gays Mills Flood Recovery and coaches youth sports.

Southwest Tech Agribusiness instructor Paul Cutting presented John Schindler with the Retiree Achievement Award. This award was developed to recognize retired faculty and staff who have made significant contributions to Southwest Tech through exemplary service in any capacity, whether in a teaching, administration or support staff role, and exemplified the values of the college in their time on campus and as a retiree.

Schindler was an excellent long-time Industrial Instructor and administrator, and is a financial contributor to Southwest Tech. He taught adjunct for several years even after his retirement. Schindler participates regularly in the Charger Golf Classic as well as retiree breakfasts.

Southwest Tech Safety Coordinator Brian Kitelinger presented the final Retiree Achievement Award to Tom Sheehan. Sheehan started at Southwest Tech in 1972 and retired in 2011. He was an instructor in the General Education Department (Social Science and Communications) from 1972 until 1985, and then assumed a position in Student Services as a guidance counselor from 1985 until his retirement. Sheehan has served on the Southwest Tech Foundation Board since 2013 and is currently ending his term as the chair of the Foundation. Sheehan is and always will be a Southwest Tech ambassador. He said he chose to stay involved because of the respect and appreciation for the students SWTC attracts, and the impact employment has on a student’s future, often right here in Southwest Wisconsin. 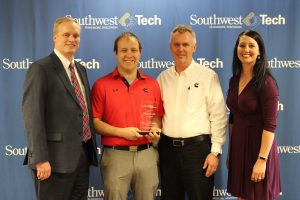 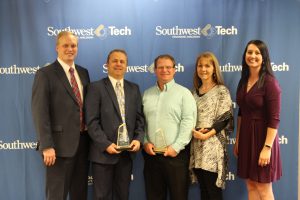 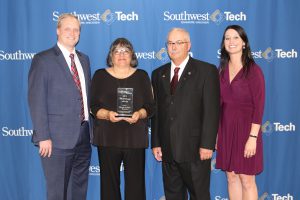 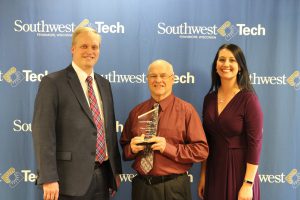 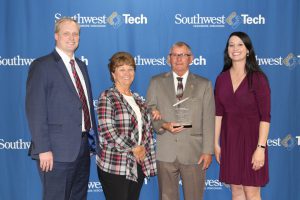