The United States Army Golden Knights Parachute Team will be jumping into Southwest Tech on Tuesday, July 2. The college is hosting the free event in celebration of the July 4 holiday and to honor military personnel; past and present. Everyone is invited to attend. 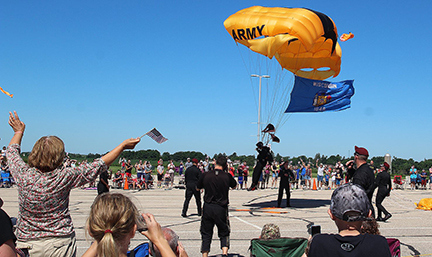 The parachute team made its Fennimore debut at Southwest Tech on July 2, 2018 and is returning for an encore performance.

The team will be landing in the west parking lot, located adjacent to the General Education Building and Child Care Center. Following the jump, which is planned for 10 a.m., the Iowa Army National Guard Boeing CH-47 Chinook helicopter will attempt to land in the parking lot, pending weather conditions. The American twin-engine, tandem-rotor, heavy-lift helicopter is among the heaviest lifting Western helicopters.

Children will be able to help the parachute team pack parachutes, get autographs, and tour the helicopter. In addition, there will be face painting on site that day as well as an information table with special Southwest Tech prizes.

“This will be another showcase day for Southwest Tech and the community,” said Katie Glass, executive director of marketing at Southwest Tech. “The Golden Knights will put on a great show, plus we’ll recognize our military men and women for their service to our country. It will be a great community event. We are excited to bring them back.”

A variety of emergency services vehicles, including from the Fennimore police department, fire department, and EMTs, among others, will be on display. A few new items are planned as well. “We’re hoping to have some more static displays and I’m sure in the next few weeks this is just going to continue to grow,” said Tom Kretschman, criminal justice instructor at Southwest Tech and member of the planning team for this event.

In addition, the U.S. Army National Guard will be in attendance with a rock wall and the DreamBIG Mobile Interactive Aviation Museum will offer A-7 and F-101/F-14 aircraft cockpit tours. 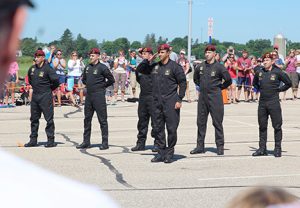 Gates for the event will open at 8 a.m. Music will be provided by Radio Dubuque. Parking will be available in the main lot, in front of the College Connection Building, as well as the east lot, in front of the Ag/Auto Center Building. A limited number of handicapped parking spots will be available in the west lot. Attendees are encouraged to bring their own lawn chairs.

The Fennimore Fire Department wives will be operating a concession stand, and all meals for veterans will be free. Veterans and active military personnel will also receive a special gift from the college.

Officially named the Strategic Army Command Parachute Team, the group was formed in 1959. Since then, the team has conducted more than 16,000 shows in 50 states and 48 countries, breaking 348 world records.

Special note: No drones will be allowed to fly on campus or within a five-mile radius of the event from 8–11 a.m. that day. Violators will be charged, fined, and have their drone confiscated.