Boscobel – A gift from a 1968 graduate will relieve a significant amount of the financial burden for Boscobel High School students who want to attend Southwest Tech.

A $600,000 gift from Patrick Thiele funded the Southwest Tech Educational Pledge (STEP) Program for BHS students. The gift was formally announced during an assembly for students, grades 7-12, in the Boscobel High School gym on Wednesday, May 1.

“Patrick Thiele’s gift is the second largest in the history of Southwest Tech. We are honored he chose the college as a beneficiary of his philanthropy,” said Southwest Tech President Jason Wood. “We are honored to have earned this catalytic gift and we will steward these funds to help Boscobel High School students. What an honor to receive this scholarship!”

Each BHS alumnus has the potential to earn up to $3,000 from the Jim and Grace Thiele Scholarship, named for Patrick’s parents. It doesn’t matter whether the student is fresh from high school, non-traditional, full-time, part-time or someone who hasn’t completely finished a program. All BHS graduates are eligible for this support.

Patrick Thiele continues to support southwest Wisconsin, as well as his hometown. He and wife, Jane, helped secure the family’s legacy with a shelter naming for his parents in Fireman’s Park in Boscobel. In addition, Patrick has supported the Gundersen Boscobel Area Hospital and Clinics Foundation, as well as the Boscobel Education Foundation. Patrick is also a director of the UW Foundation and Alumni Association.

James Thiele owned and operated the Blaine Theatre, and Grace taught at Boscobel Elementary School for 22 years. The Thieles were active in their community in a variety of groups and activities.

In addition to this scholarship, Patrick also has supported the Charger Dream Fund and the Charger Scholarship Fund at Southwest Tech.

Philanthropy, as Patrick knows so well, is an important catalyst for positive change, especially in financially-challenged areas like Boscobel and southwest Wisconsin. He has challenged Southwest Tech President Jason Wood to “think big” about ways to leverage future financial support. The creation of the Boscobel STEP Program helps the college get this new program started in a meaningful way.

Thiele believes Southwest Tech can play a key role in the stabilization and re-development of the counties and communities in its district. Patrick said, “Southwest Tech does a great job educating its students who, in turn, help build strong, vibrant communities.”

When it comes to education, Thiele focuses heavily on the net cost to students, which is a Southwest Tech strength. And if anyone knows the value of scholarships in helping aspiring students realize their academic dreams, it’s Patrick Thiele.

After all, it was a scholarship named after another successful Boscobel family that was the key catalyst for Patrick attending UW-Madison. Patrick was the recipient of the Kronshage Scholarship. Theodore Kronshage, Sr., was a pioneer Boscobel merchant. One of his sons, Theodore Kronshage, Jr., became one of the State of Wisconsin’s most prominent attorneys and left a bequest of more than $300,000 for scholarships to deserving Boscobel students.

Thiele received $500/year from the Kronshage Scholarship. With tuition costing just $175 a semester then, Patrick had the financial support he needed to go to college. Patrick earned a bachelor of science and master of science in finance degrees from UW-Madison. That education was the foundation for a successful career in investments and insurance.

Patrick and Jane now live in Stillwater, Minn., and Santa Barbara, Calif. Their two daughters and five grandchildren live in the Twin Cities while their son is an attorney in Los Angeles.

When Patrick retired, he became determined to reconnect with his hometown. “I had three goals when I retired: One, to catch up with people I had lost over the years; two, make sure I didn’t have health problems and three, give back to the people and communities that mean so much to me,” he said. 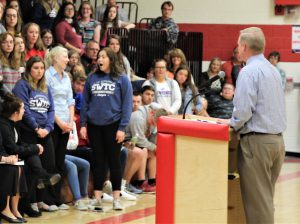