One of the photos prominently displayed in the front entrance of L. May Eatery in Dubuque, Iowa is E.J. Droessler’s senior photo. He’s dressed in a Randett Construction polo, jeans and work boots and is sitting in the back of a pick-up truck. One would assume that this high school senior was going straight into construction after graduation and that assumption would be accurate. Droessler, a 2000 Southwest Tech Marketing and Business graduate had no plans for post-secondary education right out of high school. “I was planning to go work with my brother Randy in his construction business and I did for a short time,” said Droessler. Randy was in the process of building up his business and was feeling the pressure of being self-employed.

“Looking back, I was an 18-year-old who thought I knew everything and Randy was treating me like an employee, he was tough on me in a good and real world type of way. My head wasn’t always in the game as I was often too stubborn to listen and appreciate the constructive criticism Randy had to offer,” said E.J. Things came to a screeching halt one cold, blustery January day. While working on a jobsite just north of Platteville, Wisconsin, E.J. was busy being distracted when Randy asked to cut a few boards and as the saying goes, “I cut it twice and it was still too short.” Things escalated which caused E.J. to walk off the jobsite.

Unfortunately, E.J. came to the realization that he had rode with Randy that morning and had no other option but to walk. As a stubborn Droessler he continued to walk until eventually Randy pulled up alongside and insisted that he get in the warm van. The mutual agreement was made that this perhaps wasn’t the right career fit for E.J. at that point. “Little did I realize just how much Randy taught me about being a successful small business owner,” said E.J. “I often reflect back and recall how Randy handled difficult situations on the jobsite and apply those same methods to my business.”

E.J. grew up in Kieler, Wisconsin. He was the youngest of seven children and a long line of entrepreneurs. His dad, Ernie, owned a plastering business and always assumed that E.J. would go into the trades, and follow the same path as his self-employed siblings. His mom had been encouraging him all through high school to look at colleges but with his plans set for construction, he saw no need.

“When I went home that night after quitting my job, I told my mom what happened and she went with me to check out Southwest Tech.” Droessler had a friend attending Milwaukee Area Technical College for Machine Tool and Dye and told him he loved it. He decided he might like that and enrolled at Southwest Tech, however that program was already full. “After talking with one of the advisors he convinced me I might like the Business and Marketing program and so I went for it,” he said.

E.J. said he learned balance and time management. The staff was always helpful, checked in with all the students and was willing to provide examples if students were struggling with something.

E.J. graduated with an Associate’s degree in Marketing and landed a job right away in sales. He used the experience he gained during his internship at Lacoma Golf Course to continue working in the restaurant industry as well as earn his Real Estate Appraisal license. He said he gained inspiration for the appraisal business from Mark Randall, Southwest Tech retiree and his Real Estate Law class.

He was eventually laid off from his sales roll due to the market but continued to work in the restaurant industry and real estate. “I think my resilience was due to the fact that I grew up in a small town with good values,” he said. “I was raised to work hard. When I got laid off from my full-time career, I had a mortgage, a house payment and a child to support. I had a great part-time job at a fantastic Galena (Illinois) restaurant called Fried Green Tomatoes and the fortune of working for an owner who cared. I asked Fred, the owner, if I could pick up extra hours, which he gave me and he referred me to a friend who needed some help on a construction project. I worked both of those jobs and never missed a payment on any of my bills.”

E.J. pursued the dream that he had for a long time, which was to own a restaurant instead of just work in one. He partnered with his sister and together they opened L.May in 2007, a restaurant named after his Grandma May. He became the sole owner two years ago and handles everything from human resources to purchasing to payroll as well as being in all aspects of the restaurant each night. “I make rounds each night to make sure everything is running smooth,” he said “If I feel like everything is under control at the bar I’ll check to see if the host stand is doing okay, then I’ll check on Chef Tony and his crew to make sure they aren’t falling behind. I like to walk around the dining room and talk with customers and read how their evening is going. I can tell by the way people are sitting at their table if it looks like they’ve been waiting for their food too long or if they aren’t happy with their dish and so I try to make sure I’m handling all of that.”

While running the restaurant and balancing family life with his wife and two daughters, E.J. also earned his Bachelor’s degree from the University of Dubuque.

“Between sending my oldest daughter off to college and working on my bachelor’s, I was really able to reflect back on my education at Southwest Tech and I am so grateful,” said E.J. “It’s such a wonderful school and it was the perfect choice for me at that point in my life.” 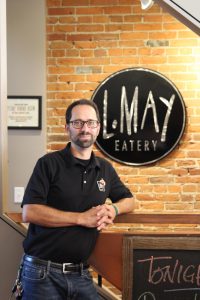