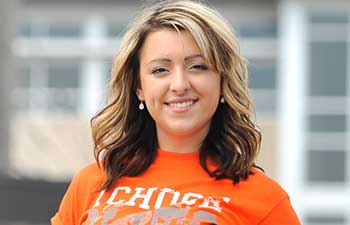 Fine art has always been a passion of Mary’s. As a high school student in Amherst, Wisconsin, she was really into drawing and painting. When she began exploring careers, she originally decided not to pursue the arts.

“I knew people who had gone to fine art schools and were not successful when searching for a career. Reading was also very important to me, so I threw out the arts and majored in English.”

Mary was 100% positive that she wanted to be an English educator. As she began her college career, she became hesitant and frustrated.

“I just wasn’t happy. I realized that I didn’t want to spend my life reviewing the work of others, instead I wanted to create something to share with others.”

“I looked at a couple of different schools and then learned about Southwest Tech from my boyfriend, who had graduated from the Automotive Technician program. Southwest Tech was more cost effective with similar courses to the university I was considering. I scheduled a meeting with an advisor and signed up for the Graphic & Web Design program on the spot.”

Mary is currently an intern in the Marketing and Public Relations department on campus; a student ambassador; and a member of GIG, the Graphic & Web Design Club. In her spare time, she does freelance design creating posters, wedding invites, and save the date cards.

“Choosing Southwest Tech has been the best choice of my adult life. I have been able to meet and network with some amazing people. I really enjoy the smaller environment and the fact that my instructors know me by name.”

Mary plans on graduating in May of 2015. She hopes to work for a Fortune 500 company doing internal design work, possibly in the Madison area.